The desert is watching me. It is hard to find words for the place. Ancient, vast, timeless, epic, still, spiritual, menacing, consuming, other worldly … Mars-like? As I attempt to walk solo across the Taklamakan desert in China’s wild west Xinjiang region, I have been almost perpetually out of my comfort zone.

I’ve had to carry up to 35kg across the edge of the desert in my rucksack in the intense heat, swim 12 times across a fast-flowing river to get my gear across, haul a cart with beach wheels that weighs up to 150kg through massive dunes (realising the load was too heavy for such dunes and retreating to find a better route). It has probably felt like the longest seven weeks of my life, and I now have just less than four weeks to go. 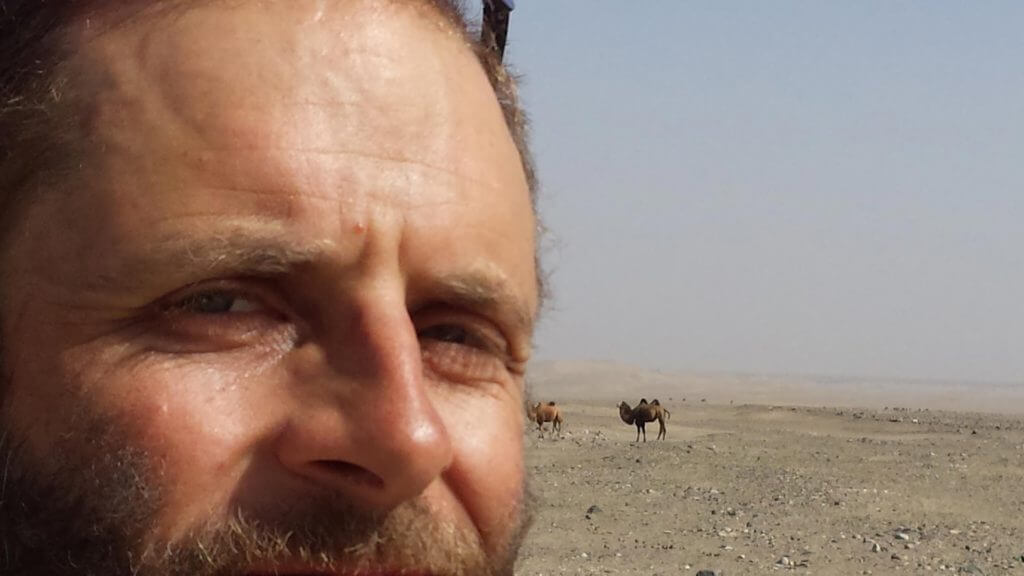 In week five, since my last update, I was thrilled to survive eight days of deep desert, following a series of valleys hemmed in at each end by huge dunes. One evening I saw a wall of sand billowing up and filling the sky behind me. I quickly threw up my tent but by the time the sandstorm reached me, although visibility was reduced to 10 metres, the wind wasn’t strong enough to do any damage. I also saw some wild camels, who ran off when they spotted me.

Although this section was hard, it felt like maybe I was starting to get the hang of things. But then, last week, after successfully emerging onto a road after my eight days alone, I unexpectedly suffered my greatest setback so far.

I was trying to sneak around a village and back into the desert (I am not breaking any laws on this expedition, but Xinjiang is a very sensitive region and I knew I would have to be discreet as local authorities probably would not approve of what I was doing). Due to a string of bad luck and a bit of carelessness, someone spotted me, and the next thing I knew I was surrounded by six local security officials, soon followed by the district’s chief of police, his translator and his bodyguard.

Then ensued several hours of debate. They were kind and friendly but, despite my arguments, in the end insisted in driving me and my cart out of their jurisdiction, 80km to the south on the southern Silk Road on the edge of the desert.

This was a major blow, because it now forced me to walk along the edge of the desert until I could find a suitable place to cut back into it, and it also broke my continuous line of walking. Having now walked 600km out of 1,200km of my expedition, I was severely demoralised and contemplated just giving up and going home.

But I haven’t. When faced with a major setback, whether on an expedition or in life, I think there are three main challenges we must overcome. The first is just to stand up and keep moving forwards. The second is to come up with a new plan. The third, and for me the hardest, is to process the setback psychologically.

To deal with these challenges, a few things really helped me. First to remember that I had a choice. I could decide to give up, or to continue. So I got up and kept walking, one step at a time towards my goal, albeit on a different route.

Second, to practise a bit of self-care. I was very exhausted and feeling down so I slept in for a few days and ate well (I bought more than 20 chocolate bars and ate lots of kebabs in the next roadside town), I listened to a couple of good audiobooks and some favourite music while I walked.

Third, as I had some phone reception along the Silk Road, I managed to talk through what had happened with four of my best friends, my parents and my wife. All gave comfort, perspective, and ideas.

In particular, a reflection from my wife really struck home and helped me deal with the painful regrets that had been going through my mind. She kindly yet sincerely told me how impressed she had been with how hard I had been trying on this expedition, that I had been pushing myself beyond my limits and doing the best I could.

Yes, I had experienced a big and very disappointing setback that meant I would not entirely achieve what I set out to do. But I had done my best, and, kindergarten teacher-ish as it may sound, the fact that I had been doing my best and was continuing to do so in spite of the setback was actually far more important than achieving the precise final goal. Bad luck, fortuitous providence or whatever had blocked the goal, but I had got up and was finishing the expedition as best as I could.

This also seems to tie in with a book I had recently read, Mindset by Dr Carol Dweck. Dweck’s research shows that effectively focusing our attention on and enjoying our effort and what we are learning through an experience actually leads to far greater benefits than if we focus on results. I’m now even more converted to her theory, as my own experience seems to line up with her research.

So now, as I sit here writing while hidden among some sand dunes waiting for nightfall so I can hopefully sneak past another community, and with 3½ weeks to go, feeling tired and desperate for the finish line, I have set myself an exciting and definitely still out-of-my-comfort-zone new route. I am scared yet determined to do my very best to complete it.

Rob Lilwall is a British-born and Hong Kong-based adventurer. He regularly speaks to businesses about the lessons he learns on his expeditions (roblilwall.com). He is writing monthly updates about the expedition progress exclusively for the Post.